Will stop going to school but will not remove Hijab: Student 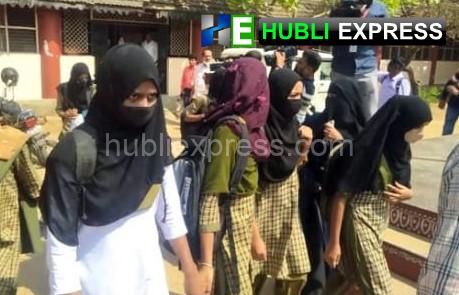 Hubballi: A few students who came to their high school to write preparatory exams refused to write the exams when the invigilator asked them to remove the hijab and appear for the exams. The incident happened at a high school located on BH Road in Shivamogga City.

Speaking to media people, the student said that she would not remove the hijab as it is compulsory according to Islam. “If they force me, I will not come to school, stop studying, but I will not stop wearing the hijab,” she said.

Shivamogga DDPI Ramesh told media people that “Around 7 or 8 students came to school wearing hijab and they were asked to remove it to appear for the exam.” They initially agreed to remove it but changed their mind and said that they wouldn’t remove it and didn’t want to write the exam without wearing hijab. ” The parents of the students were summoned to the school, and later the students went home. He said he would allow students to write today’s exam at a later date since it was a preparatory exam.