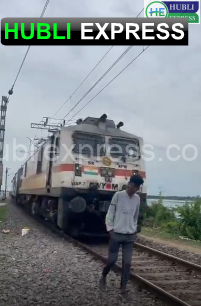 A youngster was seriously injured while filming an Instagram reel near a railway track in Kazipet, Telangana’s Hanumakonda district.

On Sunday, the incident occurred. The adolescent has been identified as Akshay Raj,17, a PU first-year student from Waddepally, Telangana, can be seen wandering along a railway track in a video that has gone viral on social media. When a train collides with him, he drifts and falls to the ground.

The entire incident was captured on a camera by one of his friend who was shooting the reel, the injured was shifted to the nearest hospital for treatment. A few months a youth from Davangere lost his life in a similar way, while doing reels near a railway track. The railway police warn people repeatedly not to walk near the railway tracks as it may lead to fatal accidents but these kinds of incidents happening.

User discretion is advised for the following video