The Congress workers claimed that they caught these local youths while deleting the names of the voters on a mobile application.

Ward number 53 corporator Arif Bhadrapur and others were in the area campaigning for young Congress leader Rajat Ullagaddimath when they accidentally met these youths. The Congress party workers said that they questioned the youths about what they were doing in the area, and the youth claimed that they were from a company and conducting a survey regarding drainage, drinking water, and electricity facilities in the area.

The workers said that on suspicion; they checked the documents and found that they were collecting data of the voters. Ward corporator Arif Bhadrapur asked the youths if they had come for an infrastructure survey and then why they were collecting EPIC data or voter card data for this. The youths remained silent and told them they were instructed to collect the details from the company and they were just following the instructions.

Arif Bhadrapur said that the area where the youths were roaming falls in two Assembly constituencies: Hubballi-Dharwad (Wes) and Hubballi Central, and he alleged the youths were collecting important data of the voters by taking their voter ID numbers and entering all the details like the head of the family, caste, polling booth area, polling booth number, and other details. “We strongly suspect that they erase the names of the voters from the electoral roll or shift their names to some other polling booths so that they get frustrated searching for their names to cast the vote and finally go home without exercising their rights,” he said.

Bhadrapur said that they urged the authorities to dig deep into this issue and find out who the masterminds are. He said that they handed over the youths to the Old Hubballi police.

According to Congress leader Rajat Ullagaddimath, it is a planned process of erasing the names of voters from economically disadvantaged sections of society. He questioned why these youths were collecting sensitive information from the voters. He strongly suspects that a few people are behind this work, and they want to use the data collected from the voters in the election to their advantage.

He demanded the police do a comprehensive investigation and identify the masterminds behind this work. The Congress leaders informed the media that the Old Hubballi police have registered an FIR in connection with the matter.

The youth claimed that they got permission from the Police Commissioner to conduct the survey.

www.hubliexpress.com spoke to Police Commissioner Labhu Ram told Hubli Express that his department did not give any permission to any company to do any kind of survey, he said he has sent ACP to the Old Hubballi station and they look into the matter. 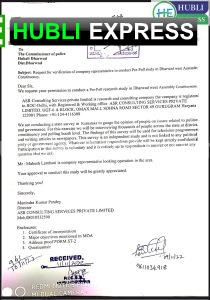