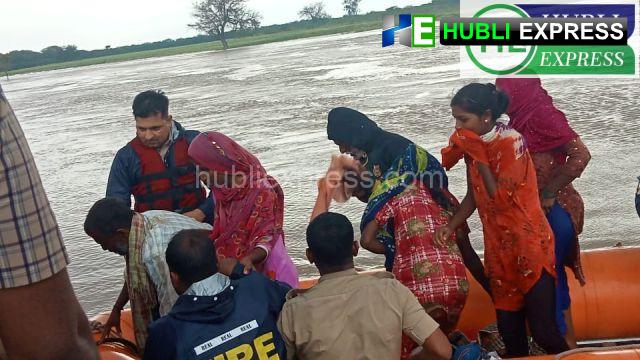 Hubball: As many as 32 labourers, including an owner of a farm, who were stuck in a flash flood caused by Bennihalla near Ingalhalli, were rescued by the staff of the fire and emergency department and police on Monday evening.

The officials said that the labourers were working in a field near Ingalhalli when the incident happened. Then, Minister Shankar Patil Munenakoppa informed the police and fire emergency departments, and the rescue operation began. The labourers were brought to a safe place in a boat.

In another incident, a 24-year-old youth was washed away in the flash flood of the Bennihalla. Anand Hiregoudar, a Byhatti villager, was washed away while he was crossing a bridge between Kusugal and Ingalhalli when the stream suddenly swelled.