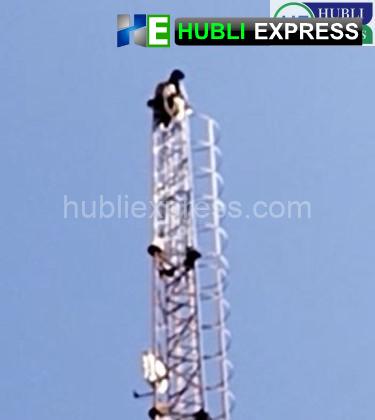 Dharwad: A man climbed a mobile tower at Jubilee Circle in the city. After two and a half hours of persuasion, the fire and emergency department staff and General Timmayya Memorial Adventure Academy personnel convinced him to climb down the tower.

The man has been identified as Javed Dalayat, a resident of Dharwad city. It is said that the man was involved in small theft cases, and he climbed up the tower, demanding that a meeting be arranged for him to meet a judge and demanding that a judge come to the spot.

The man was under the influence of alcohol. He initially refused to speak to the staff; later, they provided him with water, but he refused. He asked for biryani, and they provided it to him. Later the staff managed to provide him cell phone, and he spoke to his wife and after speaking with his wife, he agreed to climb down, but he demanded that a cigarette should be provided to him and it was provided to him by the staff and after smoking, he climbed down the tower, said the sources.

After climbing down the tower, the police took him to a station, and after a strict warning, he was sent to his relatives’ house in Madarmaddi, said a police source.