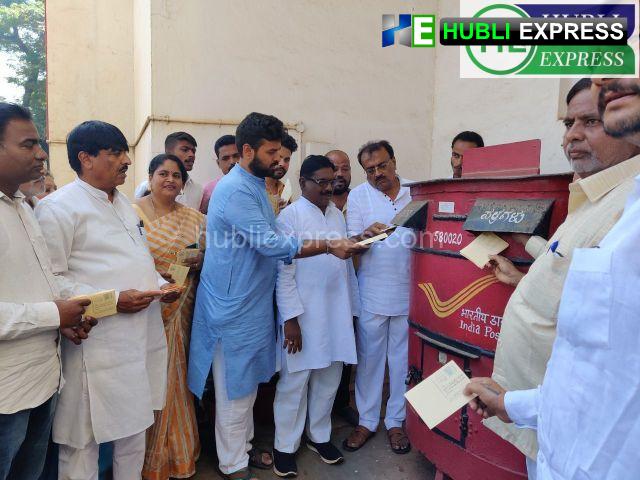 Residents of Hubballi sent 1,000 handwritten postcards to the former chief minister and MLA Jagadish Shettar, demanding him to work for the betterment of the city and improve the infrastructure of the city on Sunday.

The residents, led by Congress leader Rajat Ullagaddimath, posted these letters at the head post office near BR Ambedkar Circle. The residents alleged that the MLA, Jagadish Shettar, failed to provide good infrastructure to the residents of the constituency.

Crumbling infrastructure, pothole-ridden roads, and a dusty atmosphere are all proof that the former CM, who held many influential positions in the previous governments, failed as an MLA. The residents charged Shettar failed to bring a government engineering college and start a government degree college for women.

Speaking to the reporters, Rajat Ullagaddimath said that Jagadish Shettar failed miserably to develop the city; he has been MLA for the last 29 years, and still, Hubballi is suffering. He could have changed this city into a world-class city, but he failed in doing so.

Continuing his attack on Shettar, Rajat said, ” In his tenure, the Hubballi central constituency suffered like anything. Wherever you go, you find garbage, dusty roads, poorly lit roads, and pothole-filled roads. Despite being an MLA for 29 years, he did not provide the people with good infrastructure.