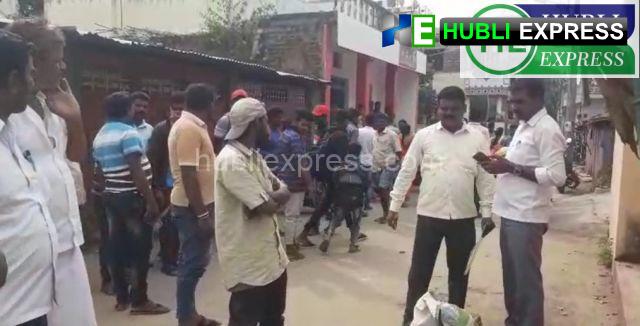 Chamaraja Nagar: Not having money or being poor can make a man do anything. In a heartbreaking incident, a man was found carrying his dead wife’s body on his shoulder. The incident happened in Yelandur city on Wednesday. The video of the man has gone viral on social media.

The man did not have enough money to make an arrangement to transport her body to the burial ground. It was discovered when a few people noticed him carrying a gunny bag and acting suspiciously on city streets.The residents informed the cop, and they stopped and asked him to open the bag. The police were stunned to find a dead body in the bag.

In the initial investigation, it was found that the man was named Ravi, a rag picker, and the body was his wife Kalamma, 26, both natives of Mandya district. According to the sources, the couple came to Yelandur some 10 days ago to collect plastic bottles and other items as they used to supply them to recycling plants and were living in a temporary hut near the forest department building.

According to the police, his wife Kalamma died on Tuesday, and Ravi, who did not have money to shift the body to the graveyard, put her in a gunny bag and started moving so that he could perform her final rites on the banks of the Suvarnavathi River.

The police shifted the body to a government hospital for a postmortem, they also gave some money to Ravi for his food. The police have registered a case of unnatural death and continued the investigation. They said that they verify his version and have not taken him off their radar.