Hubballi: Union Minister for Parliamentary Affairs, Mines and Coal, Pralhad Joshi has organised a special screening of the film Kashmir Files in Hubballi and Dharwad.

He requested residents of Hubballi and Dharwad to see the film at the New Rupam theatre in Hubballi and in Srinivas theatre in Dharwad. Starting from March 16, the film will be available in these theatres for free till March 20. There are two shows accessible for viewing: at 3 p.m., and 6 p.m.

He says that the film sheds light on the Kashmiri Pandits who were forced to flee their homeland. It is a heartbreaking account of the Kashmiri Pandits’ anguish, suffering, struggle, and trauma. The people of this generation need to know the truth that has been buried in history, as well as the sorrow of the pundits, which is why a special screening was organised, said Joshi. 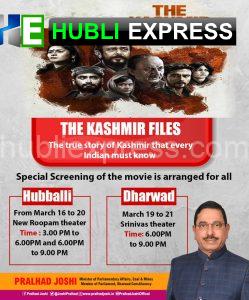