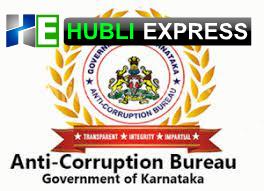 Hubballi: On Saturday, two health inspectors working for the Hubballi-Dharwad Municipal Corporation were detained in a bribery case by the Anti Corruption Bureau (ACB).

According to ACB officials, the accused are Noorandappa Giriyappa Bhajantri, 30, and Tazmil Mehaboob Sirsi, 27, both of whom work as health inspectors at the HDMC Zone 10 office.

Officials said the accused were caught red-handed accepting the bribe from the complainant, Allabaksh Mohammad Saheb Kittur, a cleaning contractor, at a restaurant in Old Hubballi Circle.

Officials apprehended the accused, with Noorundappa receiving Rs 12,000 and Tazmil receiving Rs 6,000 from the complainant, respectively.

The trap operation was led by DSP L Venugopal, which was directed by ACB SP BS Nemgouda.