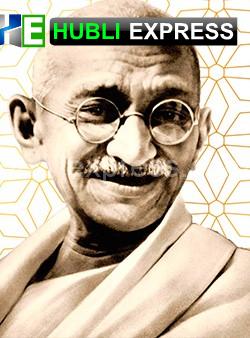 Gadag: Residents of Gadag city were surprised to see Gandhi’s standing position statue located at the Gandhi Circle without his stick. They immediately rang the local police and city municipal council officers to report it.

The thieves have stolen the stick and caused minor damage to the statue in their attempt to remove the stick. The Gadag Betageri City Municipal Council officials have lodged a complaint in this regard, and the police are on the hunt to nab the accused. The GBCMC officials said that the stick was worth Rs 5,000, which is made of steel.

If you have been to Gadag, you will know that Gandhi Circle in Gadag City is a very prominent place and is located in the heart of the city. Gandhi Circle is the major landmark of the city and the busiest area of the city. When B Sriramulu was the Gadag District In-Charge Minister, the standing Gandhi Statue was installed at the circle.