Thieves cut and steal away a sandalwood tree from a Hubballi residence. Hubballi: A 22-year-old sandalwood tree grown in the premises of Shivashankar Aihole’s residence in KHB Colony in Hubballi was chopped and stolen away by thieves on Monday morning around 2.15 am.

When the housemates tried to apprehend them, the thieves threw soda and beer bottles at them and fled the area in a hurry with chopped tree logs. The owner has yet to register a police case in this regard.

Congress leader Rajat Ullagaddimath met the family members and spoke to them. He also offered help if they needed any, in case they wanted it.

Rajat told www.hubliexpress.com that four miscreants wearing monkey caps entered the premises of Aihole’s residence around 2 pm. The residents who woke up to the noise thought it may be a coconut tree whose branches make noise whenever the wind blows at high speed.

The residents were alerted when they heard the gate opening sound, and they immediately came outside and found these people. They shouted and tried to nab them, but the miscreants hurled flower pots, soda bottles, and beer bottles at them.

Fearing a threat to their lives, they went inside the house and dialled the 112 police helpline, but police failed to reach the spot on time, said Rajat. The neighbours did not come to the rescue, as the miscreants locked their houses from outside before beginning their work.

He said the Aihole family has yet to register a complaint, but forest officials have visited their house, he said.

Rajat said that it was the failure of the 112 emergency telephone number that the staff were asking Aihole family members to send GPS details of their location, from which place, they were calling was it commissionerate area? or SP area? and answering their queries and transferring calls to the local police from the help desk consumed lots of time, he said and urged the government to streamline this process.

HDMC corporator Iqbal Navalur also met the family members and asked them not to worry. The act of the thieves transporting logs captured in a CCTV camera of Aihole’s residence. 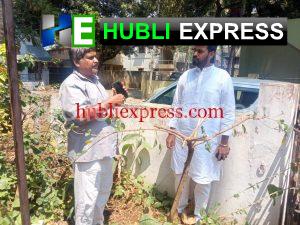