SWR is aiming to complete electrification of 200+ route kilometres in the next two months: Sanjeev Kishore. 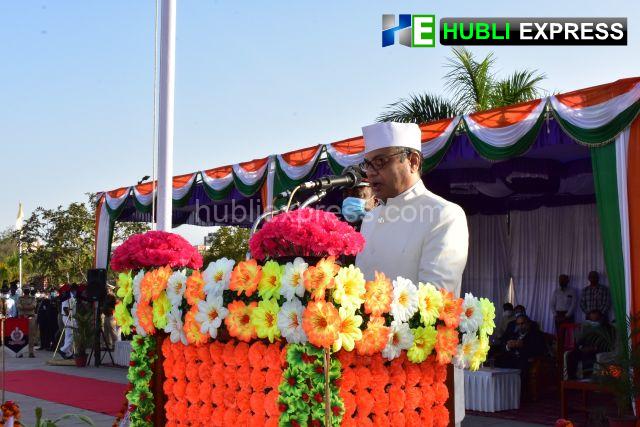 Hubballi: South Western Railway (SWR) has electrified 232 route kilometres of its network in this financial year and is aiming to complete electrification of another 200 + route kilometres in the next two months. Electronic interlocking has been commissioned at 10 stations to improve the reliability of signalling. The capital expenditure of the zone this year is 57% more than that of last year, indicating the thrust on the strengthening of the network, said General Manager of SWR, Sanjeev Kishore.

He was speaking after unfurling the tricolour at Rail Soudha, the headquarters office of SWR on Wednesday.

He said that due to the remarkable resilience and unwavering commitment displayed by the railways even in a year marked by the pandemic, gross originating revenue in this financial year has increased 65% from the last year to Rs. 4,385 crore. SWR has carried 31.64 million tonnes of freight, 20% more than the corresponding period last year, during this financial year up to December 2021.

He mentioned that SWR accords the highest priority to safety and is meticulously working on it. Security, improved services to passengers, enhanced freight loading and infrastructure development are the other key thrust areas of the zone. The punctuality performance of SWR has been impressive during this year, and SWR is currently placed third in Indian Railways on the punctuality front.

He also mentioned that under the Digital India initiative, 450 point-of-sale machines are being used to improve the ease of transactions and facilitate cashless, contactless transactions. South Western Railway has commissioned 83 new automatic ticket vending machines.

He informed that SWR has been able to usher in extraordinary growth in the development of infrastructure during the year 2021. 169 km of double track have been commissioned. The new coaching terminal at Sir M Visvesvaraya, Bengaluru, with airport-style facilities, as well as yard remodeling at SSS Hubballi, has been completed.

He further said that towards Mission Raftaar, sectional speed has been raised for over a length of 317 km this year, resulting in saving of running time of nearly 40 minutes. To improve safety, 147 km of track renewal has been completed. Permanent speed restrictions have been removed or relaxed at 18 locations. During this financial year, 5 road over bridges and 12 road under bridges/subways have been constructed during this period. So far this year, 11 manned LC gates have been closed. As a result of all these inputs, 32 express/passenger trains have been speeded up. The average speed of goods trains over SWR has nearly doubled in the last two years, and SWR presently is one of the few zones that is consistently crossing an average speed of 50 Kmph for freight trains, said Sanjeev Kishore.