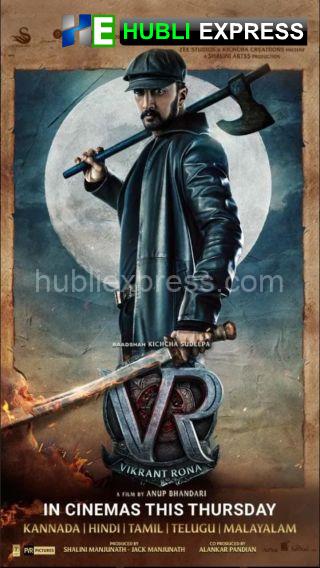 Actor Kiccha Sudeep’s much anticipated big-budget action spectacle Vikrant Rona was released in theatres across the country on Thursday. Not only fans, but the entire film industry is excited. As expected, the film had a grand opening at the box office and it is expected to break records.

The film is directed by Anup Bhandari, who also directed the blockbuster film Rangi Taranga. The film stars Jacqueline Fernandez, Nirup Bhandari and others. Sources said that Vikrant Rona was released in 3,000 theatres across the world. Movie lovers can watch the movie in 2D and 3D in theatres.

#VikrantRona one word @KicchaSudeep steal the show ,,,, Nirup excellent,,,, Ravishankar gowda ,, neetha everybody 👏 jst wow that it ,,,,, Director is the real hero kudos!!

Wishing all the success to @KicchaSudeep sir and @anupsbhandari for the spectacle #VikranthRona. To creating many more milestones!
All the best to the entire team👏