Sri Rama Sena activists urinate in the premises of the municipality office while protesting the lack of urinals in the city.

The protesters, led by Raju Khanappanavar, were staging a protest in front of GBCMC on Tuesday, but all of a sudden, they went inside the building and started urinating in the corridors. It is said that around 15 protesters urinated in the corridor and it was late for the police from preventing them from doing so.

Khanappanavar, Sri Rama Sena Dharwad division’s organizational convenor said that they have been demanding the GBCMC to construct urinals for ladies as well as gents, but the officials were not taking the plea seriously.

The GBCMC authorities have removed around 21 urinals located in the city for various reasons. A few are still there, but they are located in places not easily visible to outsiders. People from rural areas come to Gadag for various reasons, but they find it difficult to relieve themselves. Gents, on the other hand, can go somewhere like open spaces, but what about the ladies? It was hurting us a lot, “said Khanappanavar.

He said that his organization had given 15 days’ notice to construct urinals and he said that they warned of staging such a protest but they did not take it seriously. 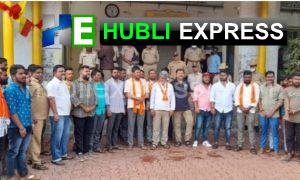