HomeHubballi / DharwadSmart City Woes; Minister lashes out at the officials for delay in...

Smart City Woes; Minister lashes out at the officials for delay in completing works.

Hubballi: District-in-Charge Minister Shankarpatil Munenkoppa cautioned Hubballi-Dharwad Smart City Limited officials that if they did not finish the projects within the given timeframe, he would take harsh action against them.

On Tuesday, he assessed the progress of HDSCL’s development projects in the city. He was perplexed as to how they could not complete the work even six months after the completion deadline.

He stated that he would not listen to the excuses and that what he desired is the result. When the minister realised that a few projects had been given extensions not once, twice, but three times, he was taken aback.

“Obviously, it is not the public’s fault that they are blaming elected officials and you (HDSCL). Many of the projects have been delayed beyond their original deadlines,” he said.

Officials will be held accountable if the job is not finished within the specified time frame, he told officials for a few projects which have already got an extension period will not get a further time and they have to finish it within the revised period.

The minister inspected Koppikar Road which is being developed by the HDSCL, the work was to be completed six months ago but the HDSCL yet lay a bitumen layer.

Minister inspecting works taken up by HDSCL in the city photo: Vijay Bakale 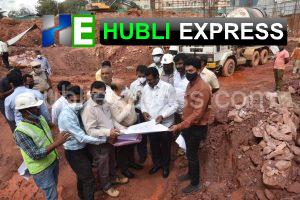 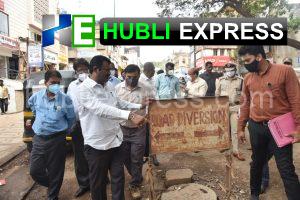 He visited Old Bus stand which is being redeveloped by spending Rs 40 crores, later he inspected the progress of Janata Bazar market.