HomeHubballi / DharwadSmart City woes: Fed up with the slow pace of work, merchants...

Hubballi: Condemning the delay in the development of Dajibanpet Road, traders and merchants staged a protest on the road and blocked it for vehicular traffic for a few minutes on Monday.

The traders or merchants who have their business establishments on this road staged a flash protest as the development work being taken up by the Hubballi-Dharwad Smart City Limited is progressing at a snail’s pace.

The merchants alleged that their business was disturbed due to unnecessary delays in executing work and that they were fed up with the dust emitting from the dug road. They demanded HDSCL officials to visit the spot and vowed that they would not clear the roadblock till they get an assurance. 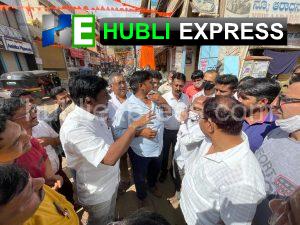 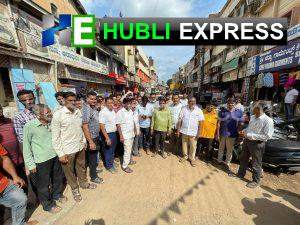 Hearing the news, HDSCL officials and Congress leader Prakash Burbure visited the spot. Following an assurance that the work would be moved swiftly, the protesters withdrew their protest and warned that if the work did not begin in the next four days, they would lay seize to the HDSCL office.