HomeStateSiddaramaiah requests that the Karnataka Assembly session be extended by one week.

Siddaramaiah requests that the Karnataka Assembly session be extended by one week.

Leader of the Opposition in the Legislative Assembly Siddaramaiah has asked Assembly Speaker Vishweshwar Hegde Kageri to extend the winter session of the Legislature by one week because 10 days will not be adequate to discuss the pressing concerns.

Siddaramaiah urged the Speaker in a letter to extend the session for at least one week. He stated that the session is being held after three years in the Suvarna Vidhana Soudha. Flood, excess rainfall, irrigation issues related to North Karnataka, agriculture crisis, issues relating to Kalyana Karnataka and Kittur Karnataka, unemployment, regional imbalance, corruption, and other state-related issues are yet to be discussed in this session.

Meanwhile, a few miscreants are trying to divert the attention of the public by creating unrest, by damaging the statue of the freedom fighter, by burning the Kannada flag To discuss all these issues, the session should be extended for at least one week, he said. 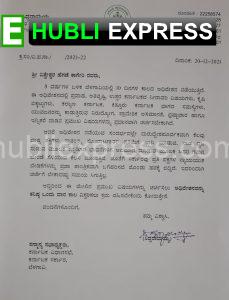