Hubballi: One of the well-known PU colleges in the twin cities, Sana Shaheen PU College, felicitated its first batch of students who secured MBBS seats for the year 2021-22.

In his address, Dr. Mulkipatil said that the medical profession is a noble profession and it is a profession where knowledge, power, and heart come together. He hailed the doctors for their role during the COVID pandemic and the role played by Sana Shaheen Group of Institutions’ Managing Trustee, Ashraf Ali.

Dr. Roshan Jahan Jawwad Shaikh narrated her story there was a pin drop silence. Dr. Roshan is a Mumbai resident who lost both her legs in a train accident thirteen years ago, has defied all odds to complete her MD in pathology, fulfilling her childhood dream to become a doctor.

Roshan Jahan left hundreds of students’ faculty who had gathered at Sawai Gandharva Hall in Hubballi to hear her story, mesmerized, and teary-eyed, by reciting tunefully a poem written and composed by her.

The poem was dedicated to her mother and father, who Roshan said, deserved, after Allah the Almighty, all credit for her extraordinary success.

“It is because of my parents after Allah, the Almighty and the Most Merciful that I am standing here in front of you as a role model,” she said amid applause from hundreds of students.

She stated that after losing her legs in the train accident, she felt completely hopeless at times.Her parents, she said, were the ones who lifted her spirits and gave her hope during her darkest hours.

“After I survived the train accident, my mother would say think…why Allah gifted you a ‘second life. It must be for something really big,” she recalled.

Recounting her ordeal, she said, “Orthopedic surgeon Dr. Sanjay Kantharia who operated on me took care of me like I was his daughter. Even after the accident in 2008, I did not drop out and studied at home and appeared for exams.

“I cleared the state’s medical entrance exam, MHCET, and was later asked to go for a medical test for the handicapped at JJ Hospital. The doctors there said that as per the rules, only students who had between 40% to 70% disability could be given admission in the MBBS course. I was denied admission as I had 88% disability,” she said and added that Kantharia then suggested she move court.

“We met senior lawyer V P Patil, who took up my case for free. During the hearing I would go to the court with my relatives. Justice Shah, after hearing my petition and seeing me visiting the court, directed the college authorities to admit me,” Roshan said. 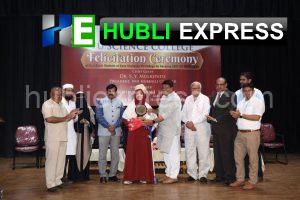