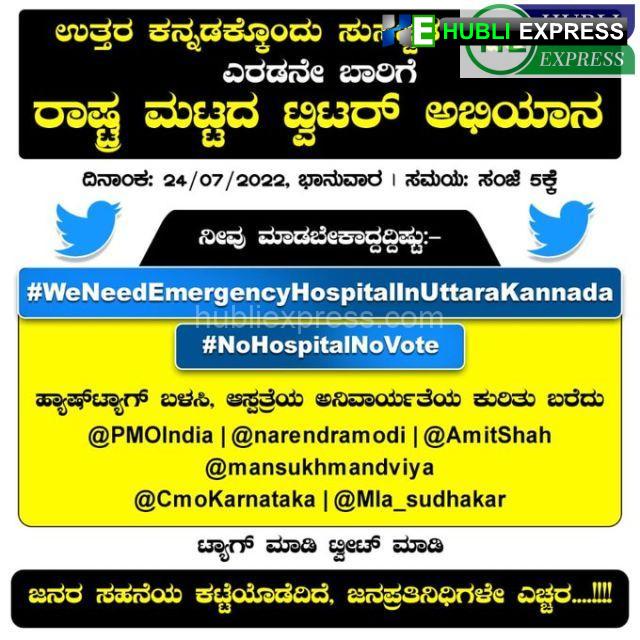 Karwar: The tragic accident that happened at Shiroor tool plaza in Udupi district in which a patient and three others were killed after an overspeeding ambulance rammed the toll booth has brought the issue of building a super speciality hospital in Uttara Kannada district to the fore once again.

According to local people, Uttara Kannada district, which is geographically one of the biggest districts and has 14 lakh people, lacked a super speciality hospital. In the event of an emergency, especially if the patient suffers injuries to the head or heart, they have to go to neighbouring districts, allege local residents.

RG Naik, an advocate and social activist from Kumta, said this demand for a super speciality hospital is not a new one. People have been raising this issue since 2014. Subsequently, the issue used to lose its steam, but this time, people are awake and will take this issue to its logical end.

He said that they have launched an agitation and that in the coming days the intensity of the agitation will only increase. He warned that if the government does not take steps to build a super-speciality hospital in the district, people will boycott the assembly election. People did not want assurances; they wanted action, and the government should take action immediately, said Naik.

Gajanan Hegde, a resident of Kumta taluk, said that the district lacks a proper multispeciality hospital and he blamed the government and elected representatives who ruled the district for decades but failed to build health infrastructure. He said Kumta would be an ideal place if the government wants to build a super specialty hospital and the majority of the accidents happen on NH63 and 66, and building a super specialty hospital would help the coastal taluk people of the district.

Many residents claimed that Karwar Institute of Medical Sciences lacked facilities and doctors, and that they were forced to seek treatment in neighbouring districts or states.

Dr. Gajanan Nayak, Director of Karwar Institute of Medical Sciences, said that the hospital has facilities with a 600-bed capacity. Starting this year, KRIMS is offering 250 seats in MBBS. A PG courses are being offered in general medicine, OBG, orthopaedics, paediatrics, anaesthesia and other streams, he said.

Medical Education and Health and Family Welfare Minister Dr K Sudhakar reacted to the trend dominating social media and said that he would have a discussion with Chief Minister Basavaraj Bommai regarding the establishment of a super speciality hospital and trauma centre and take measures in this regard.