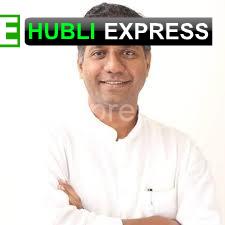 Hubballi: “I am confident that the party will give me the ticket. I have no doubt regarding that,” said Hubballi-Dharwad (West) MLA Arvind Bellad.

Speaking to reporters at his residence on Tuesday evening, Bellad reacted to a question about news or rumours doing the rounds that he may not get a ticket to contest the upcoming assembly election. He said the party is satisfied with his work and would give him a ticket; he is sure about that. He stated that the rumours are false.

On another question, the party high command is thinking of fielding him from some other constituency, probably Kalaghatgi, as he turned the west constituency into the BJP’s fort. The MLA said the high command has not thought of this, and there is absolutely no chance of him contesting the election from any other constituency. And urged journalists not to believe hearsay.

Regarding the Congress party’s two poll promises, Bellad said people will not believe them, as people have seen their ruling, and out of frustration and to get votes, they are making promises but people will not accept those. People will not believe Congress, even if they promise that they will bring the moon to the land. Recently, when Narendra Modi visited Hubballi, it was revealed why people love the BJP so much. “All questions were answered with that single roadshow,” he said.

He thanked all the residents, government machinery, media, and police department for extending their cooperation in successfully organising the 26th National Youth Festival in the Twin Cities.