Modi is to visit Bengaluru twice to take part in various programmes.

Speaking to reporters here on Thursday, after meeting Prime Minister Narendra Modi, he said that the meeting was very fruitful and appreciated the state government’s work in the 100 days after he took charge of the CM’s office.

He said they discussed various issues, mainly regarding administration. “I have invited him to Bengaluru to take part in four programmes. He suggested that we, instead of organising all the programmes on a single day asked us split those programmes. He said he would give two dates for these four programmes,” said the Chief Minister.

The chief minister informed that “the PM will lay the foundation stone for the Bengaluru Suburban rail project, inaugurate the Ambedkar School of Economics, more than 180 ITI’s have been upgraded and the PM will inaugurate those ITI’s, apart from that, Modi will take part in various programmes regarding Bengaluru’s development.”

Bommai said that the PM was happy about the programme of providing scholarships for the children of farmers to pursue their higher education and pursuing PU 1 and 2. He said that the programme should succeed as Karnataka is the only state where details of the farmers are available in digital form. If the programme is a success, then it could be replicated in other states also, the PM suggested to CM.

The chief minister also said that the PM suggested that house construction and providing sites for those houseless people should be extended to the Gram Panchayat levels. 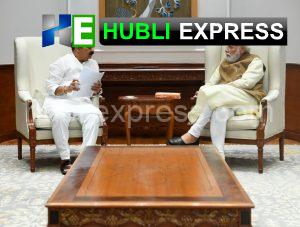 The CM briefed about R & D policies, employment, EVs, aerospace, and renewable energy policies that the government of Karnataka intends to introduce.

There isn’t much discussion about politics.

When reporters asked regarding political issues discussed, the CM said the discussion was limited to development work and very limited to politics. “I informed him that in the recent by-polls we lost one seat and won one. He said winning and losing in the election is common,” said the CM.