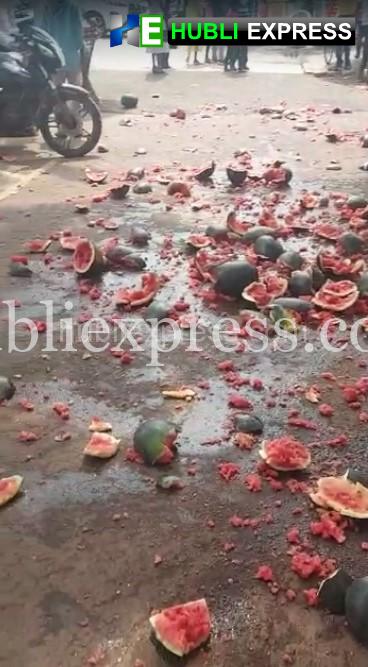 Dharwad: Tension prevailed at Nuggikeri Hanuman temple on Saturday after members allegedly attached to a pro-Hindu organisation destroyed the watermelons that were being sold by a minority community man.

The seller alleged that in the evening, a few people belonging to the Hindu organisation suddenly threw the fruits and said they were not permitted to sell anything on the temple premises.

As the argument started, both community people entered into heated arguments. Timely intervention by the police and the temple authorities helped in bringing the situation under control.

However, police have camped on the temple premises. A seller attached to the minority community said that for the last 15 years, he had been running the business and had never faced such a situation.

“Neither the temple authorities nor any competent authority had instructed us to vacate the place. We have suffered a loss. Who will take the responsibility?” he asked.

The senior administrator at the temple said they were not aware of the issue and now the meeting is being held to find out what actually happened.

Superintendent of Police P Krishnakant said that the police have booked a case in connection with this incident, but since the matter is being investigated, he can’t reveal more information as of now.

To recall, members of a Hindu organsations had requested the Nuggikeri Hanuman temple authority not to allow minority community members to do business on their premises just a few days ago.