HomeSportsMd Shami on the top with a lead of 10 wickets out... 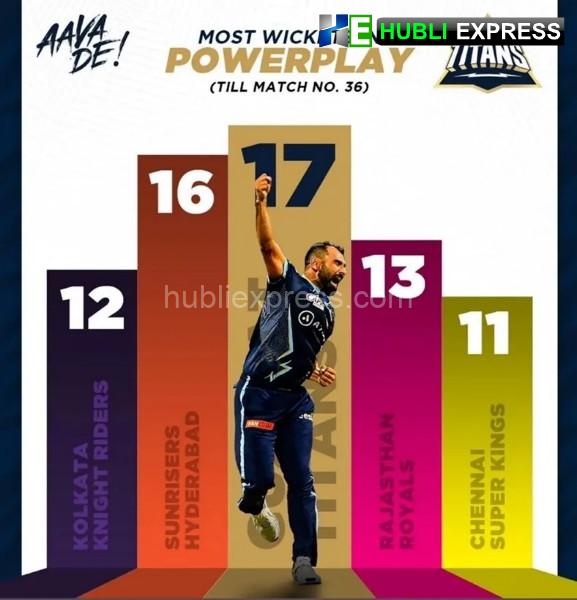 IPL 2022 is almost halfway over. Till this Sunday there have been 37 matches of the league stage. This time two new teams i.e. Lucknow Super Giants and Gujarat Titans have debuted in IPL and the performance of both the teams has been good so far. If the statistics are to be believed, then Gujarat Titans, Rajasthan Royals and Sunrisers Hyderabad have emerged as most strong teams. All the three teams are currently in the top-3 in the points table. The secret of their success lies in the powerplay i.e. the first 6 overs. The bowling average of the Titans in this period is better than the rest of the teams.

Speaking about Gujurat Titans, the credit for this one-sided victory of Gujarat giants goes to its strong team, which is leaving no stone unturned to improve the match and win consistently. One of the strong players of Gujarat Titans, who has mastered the highest number of 17 wickets in the Powerplay, is the bowler Mohammed Shami, who took the lead of 10 wickets.

He has been adopting special exercises every day to improve his body, adapt it to every situation and execute smooth play, the video of which he has posted on social media.

In the video, Shami is seen doing single leg work.

Mohammed Shami took 3 wickets for 25 runs in 4 overs against Lucknow Super Giants in his first match of the season. Shami had sent three batsmen of Lucknow to the pavilion in the powerplay. Shami has played a total of 78 matches in the IPL so far, taking 82 wickets at an economy rate of 8.6.

If any team has been surprised the most in the 15th season of IPL, it is Gujarat Titans. After the auction, it was said that there is a shortage of batsmen in Hardik Pandya’s team. But putting an end to these discussions, Gujarat has won six matches out of seven. This team is on top of the points table with 12 points. Its only defeat came against Sunrisers Hyderabad and a big credit goes to hardworking Md Shami.

Hubballi: On the eve of the mayoral election for HDMC, the Bharatiya Janata Party got the support of two independent candidates. Kishan Belagavi, and Chandrika...
Hubballi / Dharwad

Hubballi: As the mayoral poll for Hubballi-Dharwad Municipal Corporation will be held tomorrow, it is clear that voting will take place to elect the...