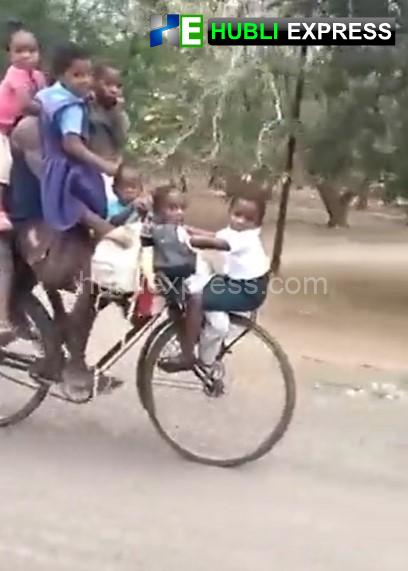 A video of a man riding a bicycle with nine children is going viral on social media. A user called Jaiky Yadav published the short video on Twitter with the description, “The world’s population has surpassed 8 billion, such humans have helped a lot in accomplishing this milestone.”

In the video, a man is seen riding his bicycle while holding nine children. While three children are seated in the rear of the two-wheeler, one is seen standing on top of the others and gripping the man’s shoulders. Two of the children are also visible perched on the front bar of the bike, with the seventh youngster facing the guy above the front wheel. The remaining two children cling to the rider’s arms throughout the journey.

The video was uploaded on Twitter on Tuesday and has already received over 216,000 views and 7,200 likes. Internet people responded in a variety of ways in the comment area. While some speculated if the nine children sitting on the same bicycle belonged to the rider, others pointed out that people like the bicycle rider were to blame for the population growth. Many users said they might not be all his own kids