HomeNationalLPG on fire: The Congress party workers stage a protest in front...

LPG on fire: The Congress party workers stage a protest in front of the Petroleum ministry

New Delhi:  Indian Youth Congress led by its National President Srinivas BV staged a protest outside the Petroleum Ministry against the rising inflation, and against the skyrocketing prices of LPG cylinders.

The protesters charged that Prime Minister Narendra Modi government came to power by showing big dreams to the countrymen; the inflation has become fatal for the poor. People are suffering from inflation, but the central government is busy in itself. Gas cylinder prices are set to cross ₹1000, the prices of fuel were on fire. People are upset due to inflation, but the government is not ready to listen to the call of the people.

The National President of Indian Youth Congress, Srinivas said that why did the Modi government punish the public by continuously increasing the prices of LPG cylinders? The price of the gas cylinders has increased by up to ₹190. Modi government has become very expensive for the country and the countrymen. Inflation is highest in India as compared to neighbouring countries, and the prime minister is saying that the country is changing. 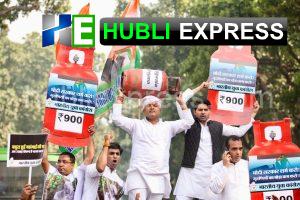 He also said that the only and only Modi government and its anti-national policies are responsible for the troubles that have broken back of the country. According to the reports, most graduate unemployed are wandering on the streets today, but the government is busy in its branding by spreading its false propaganda. He also said that the Modi government has looted the people by increasing the tax under the ‘Janloot programme’.

He said that the price of gas cylinders has more than doubled during the Modi government as compared to the Manmohan Singh government. People are being trapped in the vicious cycle of inflation by showing the dream of good days. But all these things do not seem to make any difference to the government. If there was even a slight difference, they would not have committed such atrocities on the public. 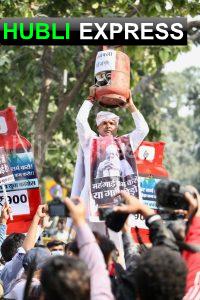