Hubballi: The protest by the Junior Doctor’s Association of the Karnataka Institute of Medical Sciences is likely to intensify as the government is delaying releasing the COVID risk allowance.

The doctors’ protest entered day two on Wednesday. The doctors have joined the nationwide protest call given by the Federation of Resident Doctors Association (FORDA) against the repeated postponement of NEET-PG 2021 counseling as well as other issues such as the late payment of the COVID risk allowance and the demand for restructuring of academic fees for the 2018–19 academic year.

The doctors took out a candlelight march on the main streets of Hubballi. The march began from Sangolli Rayanna Circle and ended at Rani Chennamma Circle. Holding placards and candles the doctors raised slogans against the government.

The doctors were joined by the patients’ attendees after learning the genuine demands of the doctors. They too raised their voice supporting the junior doctors. 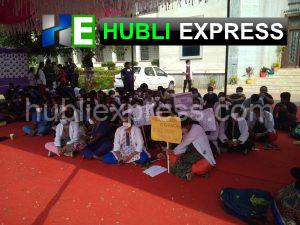 The KIMS JDA is also mulling withdrawing emergency services, but they would wait for the directions of the Karnataka Association of Resident Doctors (KARD) in this regard.