Hubballi: The Keshwapur police launched area dominance patrolling on Tuesday. Area domination patrolling is group patrolling in which police personnel simultaneously patrol a particular area or a few areas within their station limits.

The intention of the patrolling is to instill a sense of confidence among the residents that the police are always with them and to monitor anti-social elements and send a message to them they would be dealt with harshly if they failed to remain quiet, said Inspector Jagadish Hanchinal.

Inspector Hanchinal said that based on the direction of Commissioner of Police Labhu Ram, the initiative was launched. On Tuesday evening, 35 policemen on 25 bikes patrolled from Sarvodaya Circle to Ramanagar via Ramesh Bhavan, Shanti Nagar, Bengeri Circle, Gopankoppa, Siddarama Nagar, and Gandhiwada, he said.

During one hour of patrolling, the staff also interacted with residents and informed them about crime prevention methods. The police said that every Saturday they would do group patrols, but the number of participants in each group would be 4-5. However, once a month, the entire station staff takes part in group patrols, according to the police, who added that the areas would be different each week.

PSI Sadashiv Kanatti and other staff were part of today’s patrolling. 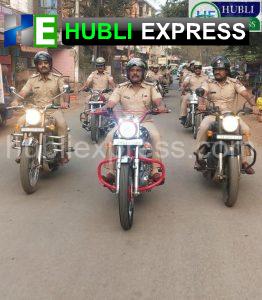 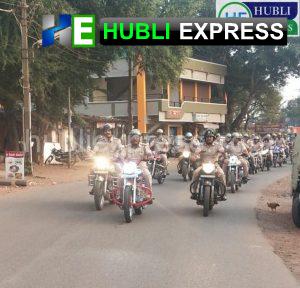 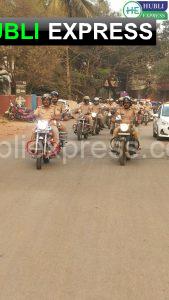