Jagadish Shettar sworn in as mayor of Hubballi Dharwad and Bellad as his deputy. Hubballi: Condemning delay in holding mayoral election and formation of the elected body for the Hubballi-Dharwad Municipal Corporation, the Congress party workers staged a unique protest at the HDMC office premises in Dharwad on Tuesday.

The protest was organized by the Hubballi-Dharwad City District Congress to draw the attention of the state government to hold mayoral election to the HDMC. The HDMC is being run without an elected body for the last three years. The election for the HDMC was held in the month of September last month and since then the new members of the HDMC were waiting to assume office.

Congress leader Rajat Ullagaddimath charged that the state government is making unnecessary delays in holding the election. The BJP leaders give big lectures on local bodies’ empowerment but in reality, they behave exactly the opposite. Local leaders like MLA Jagadish Shettar, Arvind Bellad never respect or care about local government, he said and urged the government to hold the election immediately by issuing the notification. 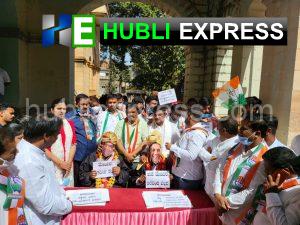