In Hubballi, a bank robbery went wrong; police apprehended the robber in minutes.

Two police constables attached to Suburban police station and South Traffic police station nabbed the robber within minutes after he tried to flee with the money.

The police nabbed the accused after a chase on the busy Koppikar Road on Tuesday.

Police Commissioner Labhu Ram said that the 33-year old accused entered SBI Bank located on Koppikar Road wearing a monkey cap at around 2.15 PM and as soon as he entered the bank, he opened the knife and brandished it at the staff of the bank and threatened with the knife.

As soon as he entered the cashier’s room, he filled the bag with cash and within minutes he escaped from the bank, but the bank staff started chasing and shouting. As soon as the accused reached the main road, police constable Manjunath Halwar of Suburban police station, who was on patrol duty, alerted by the shouting, started chasing the accused with the public and bank staff. As soon as the accused reached Metropolis Hotel, Umesh Bangari, a traffic cop who was on duty, nabbed the accused without worrying about the danger. Both Umesh and Manjunath held him tight and threw away the knife he was holding. Immediately the other policemen came to the spot and took away the accused.

The police managed to recover the entire Rs 6.39 lakh from the accused, which he robbed. The DG and IGP announced a cash reward of Rs 25,000 to those brave police constables, said Ram.

Ram said the accused is a native of Vijayapura and had been working in Mysuru for the last few months. More details about the accused have yet to be gathered. Whether he was the only one or a gang involved in the robbery, or whether he had any criminal background, and other things.

Inspectors Anand Oonakudre, Ravichandran DB, and others were present. 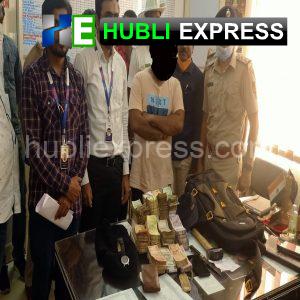