In how many ways potholes can be filled..? Here is an interesting answer.

Is the Hubballi-Dharwad Municipal Corporation or other government agencies facing a severe financial crisis? Looking at the pictures, it seems so.

The agencies that have the responsibility of filling potholes on the roads that they maintain often forget to repair the roads. Some roads belong to NH, some roads belong to PWD, and HDMC, and whenever these government agencies wake up, they fill the potholes with materials such as debris, mud, cement mix, and jelly stones. But this time, they broke all the records by filling the potholes with the sludge formed in the sewage water drains.

You wonder, looking at the capacity of these agencies and their innovativeness in filling potholes. They proved that they can fill the potholes in many ways, and sludge can also be used to fill them.

In the Hosur area, potholes on the road were filled with sludge a filthy material formed in the sewage water drain, and the photos were shared by the Congress leader Rajat Ullagaddimath. He said that one of his party workers shared the images; they informed him that they were Pourakarmikas and blamed HDMC for filling those potholes with dirt.

HDMC Commissioner Suresh Itnal said that the corporation was not doing any patchwork on that stretch. The road is being developed by the National Highway under the Central Road Fund. “It could be an act of mischief. He clarified that the person seen in the pictures is not from the corporation. Could civic workers spill that dirt on the road? It is not possible. We are verifying the genuineness of this incident. “ 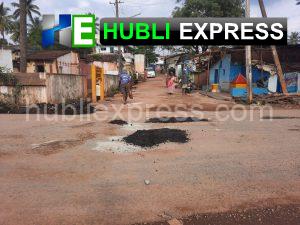