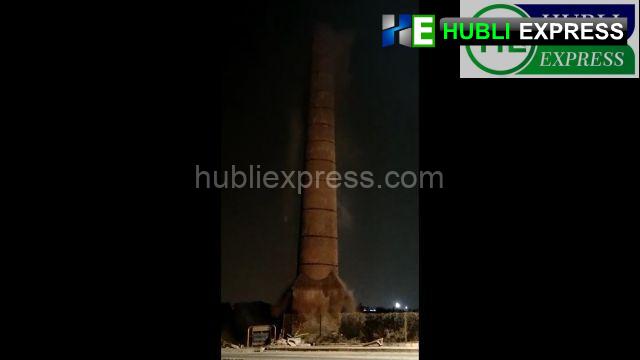 Hubballi city’s major landmark, the Mahadeva Textile Mill’s chimney, which remained tall even after the closure of the mill, was demolished on Tuesday late at night, according to the sources.

Senior residents of Hubballi claimed that MT Mill was the city’s landmark; no one used to call Karwar Road by that name; instead, it was referred to as MT Mill Road. The mill employed hundreds of employees back then. The mill was part of Hubballi’s history, and the chimney of the mill remained even after the closure of the factory. With the demolition of the chimney, the memory of Old Hubballi vanished.

Amruth Joshi, a senior journalist and activist, told us that the mill was started in the year 1898, which was originally started by Forbes and Forbes, a British company, and then handed over to Bharat Mill and later to Mahadeva Textile Mills. Later in 1979, the central government took it over and finally handed it over to the state government in 1986. The mill had several departments like spinning, weaving, dyeing, printing, ginning, and pressing. The mill, which was working with 1,200 spindles, was producing yarn of 120 counts, he said.

Joshi said that the mill also took up ginning and pressing with the raw material procured from APMC. It had a labour strength of 534. During 1993-94, the mill produced 11.07 lakh kg of product which generated Rs 522.90 lakh.The chimney was all that was left of this epic mill, he said.