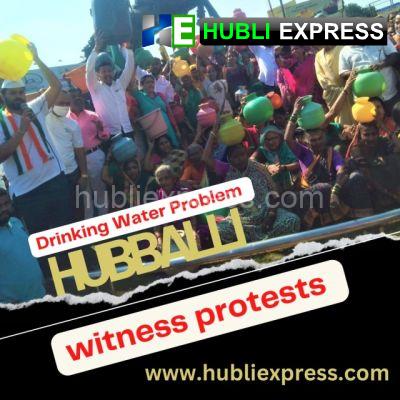 Hubballi: The drinking water problem in the twin cities is getting worse with each passing day. Residents are resorting to protests every day to demand a proper supply of drinking water, and on Saturday, residents of Wards 50, 57, and 56 staged a protest with empty plastic pots.

They staged a protest march from Indira Glass House to Rani Chennamma Circle, demanding that water be supplied regularly. They raised slogans against HDMC and the L&T company, which was tasked with supplying water in the twin cities.

Protesters were led by Vidyanagar Block Congress President Rajat Ullagaddimath, who staged a brief protest at the circle.

Addressing the gathering, Rajat Ullagaddimath lashed out at MLA Jagadish Shettar, HDMC, and L&T for the looming water crisis. He said all three failed to provide regular drinking water to the residents. Shettar should be ashamed for failing to solve the problem despite having represented the constituency for many years. He warned that he would stage massive protests in the coming days if the water supply was not immediately normalized.

Police warn Rajat not to stage a protest

Rajat Ullagaddimath also alleged that there was massive pressure on him not to stage a protest at Rani Chennamma Circle, and they also threatened that they would register a case against him if he continues with the protest. “Staging a protest and demanding water has become a crime in the city, and the pressure on the police to prevent me was the result of how the government is misusing its machinery,” he said.

Corporator Arif Bhadrapur, Senthil Kumar, and others were present.