Hubballi: Police take out route march in the city. Hubballi: In the backdrop of the Hijab and saffron shawl controversy, the city police, took out a routemarch in the city on Friday.

Sources said that the march was held to instill confidence among the residents and to discourage anti-social elements from taking the law into their own hands.

City police, along with police personnel from the City Armed Reserve Force and Karnataka State Reserve Police, took out a route march in the sensitive areas under the North and South Sub Division limits.

In the North Sub Division, the route march began from Silver Park and passed through Masooti Oni, Gopankoppa, Bengeri, Shanti Nagar, and ended at Sarvodaya Circle. 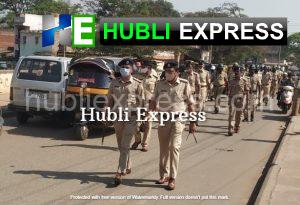 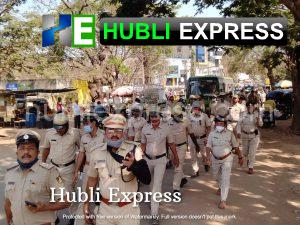 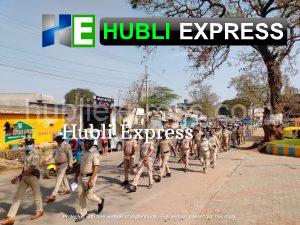 Enhanced police presence in the city

There was a visibly enhanced police presence in the city. Sources say the route march and continuous patrolling were to send a message to anti-social elements that if they take the law into their own hands, the police will not leave them.

When asked about the enhanced police presence in the city, Police Commissioner Labhu Ram said that it was routine. The police would be present all the time, and there is nothing special about it. The route march was also routine exercise, and there was no special meaning to it, he said.