Hubballi: A city-based journalist suffered multiple bite injuries after two dogs attacked him in the Pendargalli area of the city on Thursday.

The journalist claimed the dogs attacked him while he was riding his bike home from his morning walk. He said he did not run away from them, thinking that if he showed courage, the dogs would not harm him and they would simply go away, but that did not happen. “The dogs started barking when I entered Pendargalli. I stopped the bike, and they started barking more. I tried to get a stone to disperse them, but one dog grabbed my pants, and I fell to the ground. Another dog bit on my elbow area, on my stomach, on my back, and the dog that held my pants bit my ankle. “I was terrified, and somehow I escaped from the grip of the dogs, and I ran, leaving behind my bike; one dog chased me, and again I fell to the ground, I quickly stood up and fled the area,” he said.

The dogs chased a few others, but luckily they did not suffer any injuries. The journalist filed a complaint with the HDMC Corporation Commissioner about the incident, and the dogcatcher team apprehended the eight dogs on Friday morning. The journalist urged HDMC to end the stray dog menace. 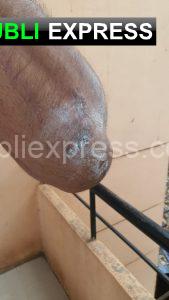 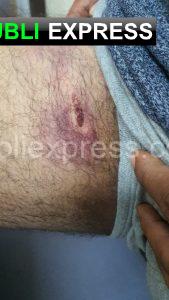 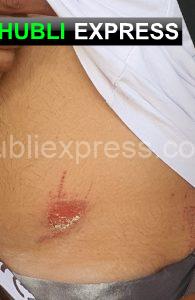 The journalist shows injuries he suffered in the dogs attack