Chitradurga: Most people think of Basavaraj Horatti, the Chairman of the Legislative Council, as a tough guy, but what they don’t know is that he has a tender heart. He aided a road accident victim in Chitradurga’s Sirigere district on Saturday.

Horatti was travelling from Bengaluru to Hubballi when he noticed a road accident near Sirigere and instructed his driver to pull over. Horatti went to the accident scene and comforted the injured. He gave the victim a first aid kit, and his aides administered the victim first aid.

The accident involved a bike and a car, with a couple and a boy on the bike, all of whom were gravely hurt. Horatti used his cellphone to contact the medical emergency service and the police. He gave the accident victims water and reassured them that nothing would happen. 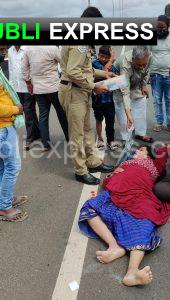 Horatti stayed at the accident scene for more than half an hour before leaving after the victims were transferred to an ambulance.

Horatti told Hubliexpress.com that he noticed the accident since our vehicle was travelling at a high speed and we went approximately 200 metres past the accident site before turning around and returning to it.

We discovered that the couple had been harmed and that their youngster had suffered from moderate injuries.

“My car had a first-aid kit, and my aides administered the medicine. Both the bike and the car were heading towards Davangere. The car driver is claimed to have abruptly applied the brakes. However, the cops will investigate. My eyes welled up when I saw the patients’ conditions, and I decided not to leave until medical assistance arrived “Horatti recalled.