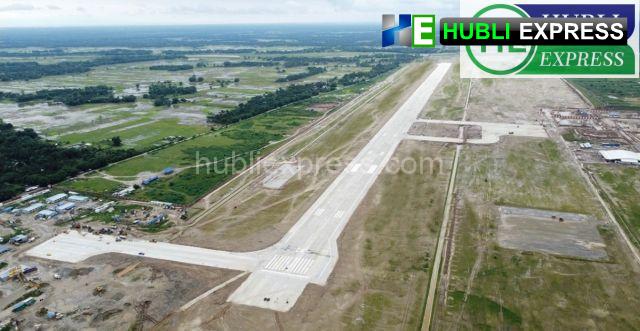 Delhi: Development of a Greenfield airport is governed under the Greenfield Airports (GFA) Policy, 2008. As per the Policy, a State Government or an Airport Developer, willing to establish an airport, is required to send a proposal to the Ministry of Civil Aviation (MoCA) for 2-stage approval i.e. ‘Site-Clearance’ followed by ‘In-Principle’ approval. Such proposals are considered by MoCA as per the procedure stipulated in the GFA Policy. The responsibility of implementation of airport projects including funding of the projects rests with the concerned airport developer including the respective State Government (in case the State Government is the project proponent).

Government of India (GoI) has accorded ‘In-Principle’ approval for setting up of 21 Greenfield Airports namely, Mopa in Goa, Navi Mumbai, Shirdi and Sindhudurg in Maharashtra, Kalaburagi, Vijayapura, Hassan and Shivamogga in Karnataka, Dabra (Gwalior) in Madhya Pradesh, Kushinagar and Noida (Jewar) in Uttar Pradesh, Dholera and Hirasar in Gujarat, Karaikal in Puducherry, Dagadarthi, Bhogapuram and Oravakal (Kurnool) in Andhra Pradesh, Durgapur in West Bengal, Pakyong in Sikkim, Kannur in Kerala and Donyi Polo, Itanagar in Arunachal Pradesh across the country.

GoI has granted ‘In-Principle’ approval to the State Government of Gujarat for the development of two Greenfield Airports at Hirasar (Rajkot) and Dholera (Ahmedabad). The State Government has collaborated with Airports Authority of India (AAI) for development of the Hirasar airport at a project cost of Rs. 1405 crore. As regards development of Dholera Greenfield Airport at a project cost of Rs. 1305 crore, a Joint Venture Company comprising AAI, Government of Gujarat (GoG) and National Industrial Corridor Development and Implementation Trust (NICDIT) holding equity in the ratio of 51:33:16 respectively has been formed to oversee its implementation.