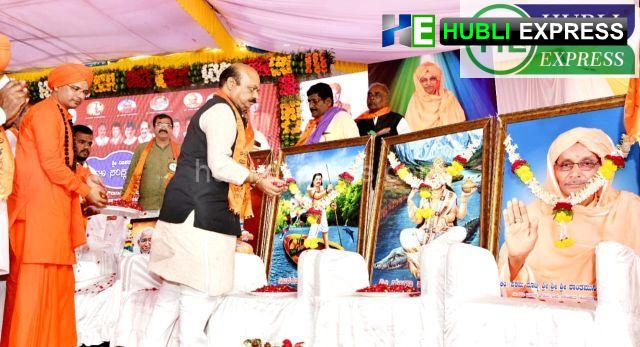 Haveri (Ranebennur):  The Gangamatastha community will soon be included in the ST category, said Chief Minister Basavaraj Bommai.
Speaking at the inauguration of the 903rd jayanthotsava of Sri Nija Sharana Ambigara Chowdaiah and Sharana Samskruthi Utsav organized at Sukshethra Narasipur Gurupeeta here on Sunday, he said a file about the inclusion in ST is before Registrar General of India. This has been discussed with Union Tribal Minister Arjun Munda and it is in the final stages of approval. It has to be passed in the Cabinet meeting. The explanation sought by the union ministry concerned has been sent and work is in progress. Steps will be taken for the smooth approval of the same.

He said the government of India will unite all 28 sub-sects. There is strength in unity. The growth of this mutt is attached to the development of this community. The inspiration will be derived from this mutt and also do the job of infusing strength in it. A guru kula is being constructed and the government has already released Rs 5 crore to this mutt. Another Rs 15 crore will be released. Besides, Rs 2 crore has been sanctioned out of the grants given to the backward classes mutts and that will also be released soon.

Bommai wanted the mutt to provide education, shelter, and food to students ad the Sharana tradition must continue. This community is into various professionals and doing inland fishing on a big scale. In the changing times, students may face contemporary challenges but they must face them boldly. This will help in the progress of the community. The parents must provide education to their children despite hardship. “I have come here as a devotee of the Gangamatastha pontiff and the necessary grants will be reserved for the construction of a community hall in the coming budget.
Chowdaiah’s important role in the ‘conservation of vachanas

The CM said Ambigara Chowdaiah was known for telling the bitter truth for which reason 12th-century reformer Basavanna had called him ‘Nija Sharana’. Ambiga Chowdaiah had predicted ‘Vaicharikate Kranti’ (Rationality revolution) and stressed the preservation of vachanas, and it became true. If vachanas are amidst them it’s because of Ambigara Chowdaiah. If any caste or society understands their Samskara, culture, and heritage, they can build a good future. “You belonged to the community of Shiva Sharanara. It is the only community that will help to cross the river from childhood days. This society must come forward socially, economically, and academically. In this 21st century, the aspirations of all communities have increased. The oppressed classes must get an education and lead a self-reliant life”.