HomeStateFurious KIMS doctors vent their anger against alleged misleading programme of a... 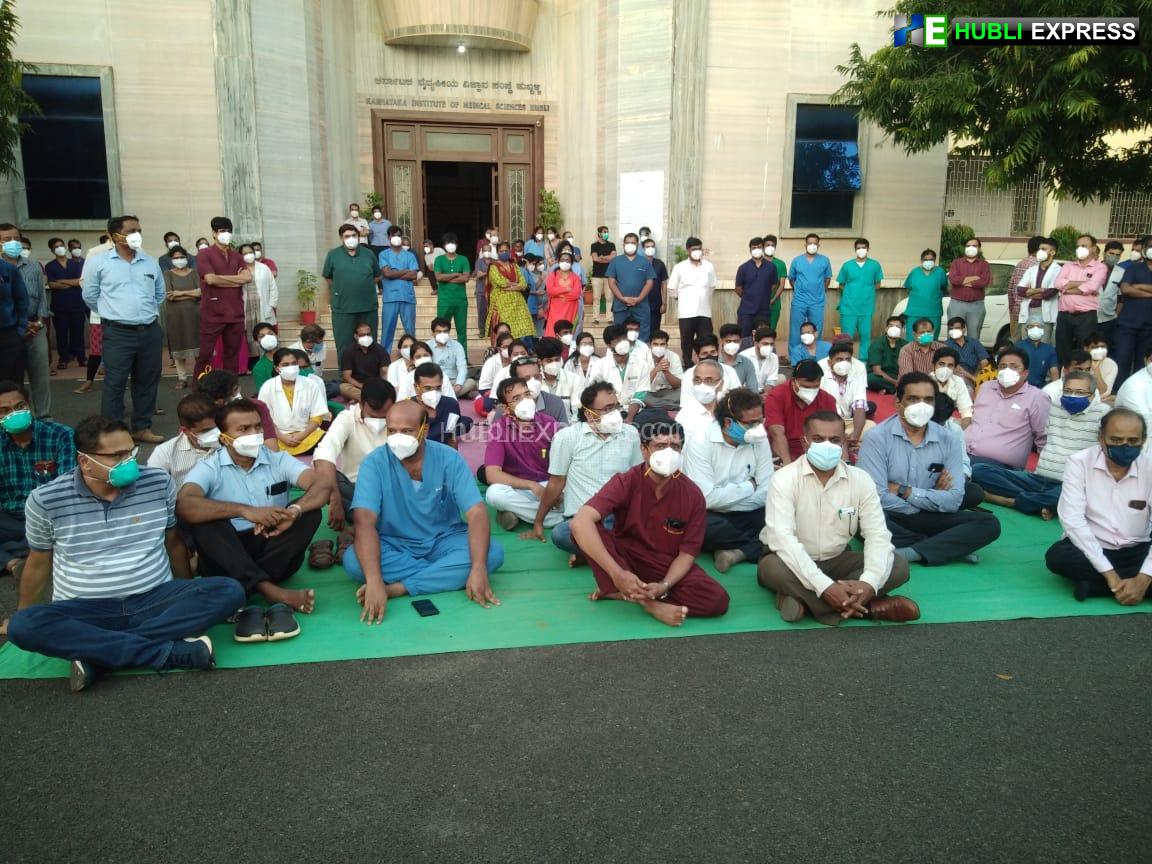 Hubballi: On Monday evening at the Karnataka Institute of Medical Sciences (KIMS)premises the doctors, postgraduate students, resident doctors were high on emotions, they were all in an angry mood against a malicious, misleading, unverified, one-sided story broadcasted by a media channel on Monday morning.

The doctors said the channel which claims they work for ‘better society’ aired an allegedly ‘sting operation’ without verifying facts, used foul language against reputed doctors and tarnished the image of the doctors working in the pandemic without caring for their lives.

The angry doctors said that for the sake of TRP, the channel for ‘better society’ intentionally showed that some doctors skip their duties. But after the pandemic duty timings have been changed and the doctors working on various shifts of six hours. Before broadcasting the alleged programme on their channel they could have talked to the Director of KIMS and have sought his reaction to the allegations.

“ The channel doesn’t know how the doctors are working and in what condition we are working. Hundreds of doctors were infected with deadly Coronavirus infection and our family members are facing the risk of contracting the infection. This is the reality. The channel for the sake of publicity to gain viewership allegedly broadcasted that few of our doctors not doing their work properly and drawing a salary doing no work. The broadcasted programme is far from the truth,” said agitating doctors.

The doctors of KIMS said they hurt by the way the programme was filmed and broadcasted using foul language. The doctors alleged they shot the videos at different intervals of time and edited in such a manner just to show that they skip their works. The programme’s sole intention was to target the doctors, tarnish their images and bring a bad name to KIMS.

WE WAIT FOR 24 HOURS

The doctors warned they wait for the next 24 hours if the administration or government takes action against 11 doctors who were projected as they skip their work and concentrate on their private practice, “ We will be forced to tread on a different path. We are not blackmailing, but the facts should be right. There may be faults, there may some lack, but there is some setup. They should have brought the issue if they feel it is genuine to the notice of the KIMS director. He would have ordered an inquiry, if found guilty take action mercilessly, baseless allegations we will not tolerate, “said Dr Rajshekhar Dunda Raddy president of KIMS Doctors Association.

WE ARE READY TO FACE ACTION

“ We are committed to saving our colleagues, we know they are not wrong. We are united, we will fight together. Our doctors were wrongly projected. We are ready to face any challenge and we will not leave their hands,” said Dr KF Kammar.

Dr Kammar added that if the government takes action against these doctors just based on a so-called sting operation, the morale of the doctors would be down and they would not come forward to treat the patients and the entire hospital atmosphere may change.

“ Hence we request the government to go by facts, let the truth be revealed. The government should not take any hasty decision,” he said.

One doctor told hubliexpress.com that the channel people don’t know that many doctors visit the hospital at midnight to treat the patients. Work wearing PPE kit for six to eight hours. These things they don’t recognise. To sensationalise the news they stoop to any level, the doctor said.

KIMS Director Dr Ramalingappa Antartani received the memorandum on behalf of all the doctors and he praised the work of doctors and he assured them that he is with their colleagues.

“KIMS has earned a good name in this pandemic, let us continue the excellent work without bothering about this news. I ensure that our colleagues’ interest will be protected. I have issued show-cause notices to all 11 doctors and I am confident that they would give a proper answer to the allegation and I will speak to the Medical Education minister and try to present the facts before him,” he said.