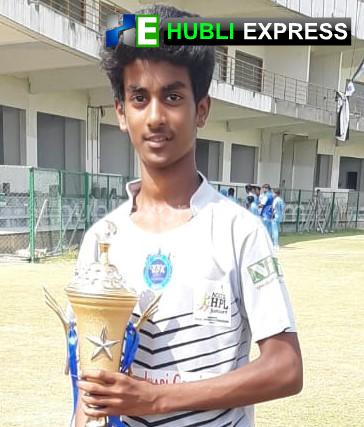 Hubballi: Although injuries on the cricket field are normal, it makes you sweat in anxiety when the players receive severe blows.

A player received head injuries after colliding with another player after a strange fielding accident reported during a divisional level cricket match at the KSCA Stadium in Rajnagar.

The player who was injured after colliding with another player was Prajwal Shirol. A match between Hubballi Cricket Academy “A” and Dharwad’s SDM “B” team took place on Saturday. Prajwal Shirol and Prajwal Borannavar clashed in the 19th over of the match while both going for the ball on the field.

Prajwal’s head is said to have collided with the Borannavar’s knees. Prajwal collapsed on the spot as a result of the incident, and he was taken to the hospital right away. Prajwal required an emergency operation and doctors operated on him right away. Prajwal, according to sources, is being treated at the hospital’s intensive care unit.

Prajwal is recovering well, according to KSCA Dharwad zone Chairman Veeranna Savadi, and may be moved to a general ward tomorrow (Tuesday). “I had the chance to meet him. He seemed to be responding well to the treatment, and he even spoke to me “Savadi stated.

Prajwal represented the Dharwad zone under-19 cricket tournament in a state-level tournament.