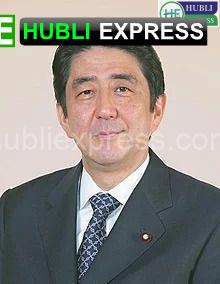 Shinzo Abe, Japan’s former prime minister, was taken to hospital on Friday after falling while delivering a speech in the western city of Nara, state broadcaster reported.
A gunshot sound was heard at the time, and a male suspect was captured at the spot, according to NHK. During Abe’s address, a reporter on the scene said, heard two consecutive booms. According to Kyodo News, the former prime minister was unconscious and appeared to be in cardiac arrest.