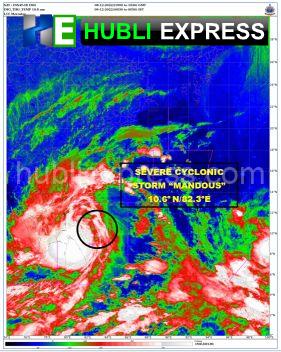 Cyclone Mandous may have an impact on people in north interior Karnataka; the region may see mild to moderate rainfall (30 MM) from December 10 to 12, according to Dr RH Patil, principal nodal officer of GKMS unit, Dharwad.

Tamil Nadu will receive heavy rainfall as cyclonic storm ‘Mandous’ over the Bay of Bengal is expected to cross the coast near Mahabalipuram at midnight of December 9.

Beginning December 9th night, the southeast region of Karnataka may experience drizzle or light rains, said Dr Patil. And this rain may spread to entire state may experience and mostly it remains cloudy, he said.

SCS Mandous over SW BoB about 200km East of Karaikal at 0530IST of today. To weaken into a CS and cross north Tamil Nadu, Puducherry and adjoining south AP coast between Puducherry and Sriharikota with a windspeed of 65-75 kmph around midnight of today to early hours of 10 Dec. pic.twitter.com/xDM3zJsG43

Light to moderate rains ☔ ahead for #vizagcity –#kakinada coastal belt including #tuni and #anakapalli during next 2-3 hours with 20-30kmph winds. Cyclone mandous impact started in these areas. Cool and pleasant weather whole day. pic.twitter.com/u92c8BsKcW