Hubballi: The Congress party has appointed new office-bearers to the Vidyanagar and Unkal Block Congress in order to win the Hubballi-Dharwad Central constituency in the upcoming assembly election. They have appointed new presidents to all 25 wards of the constituency based on the suggestion of KPCC President DK Shivakumar.

Shivakumar was in Hubballi just a few days ago, and this matter was discussed with him; based on his suggestion, a new team was constituted. The team will work to ensure that the Congress party’s candidate wins this election. The new office-bearers will take over the party office on Karwar Road tomorrow (Sunday).

The Congress is aiming to strengthen its base at the booth level, and looking at the changes, the Congress is rolling its sleeves to defeat the BJP candidate. Interestingly, recently joined former ZAC of HDMC Prakash Galemmanavar has been appointed as the treasurer of the Vidyanagar Block Congress, and retired HESCOM officer KN Banakar has been appointed as the president of ward number 51. 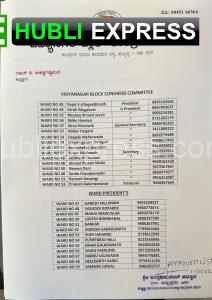