BELLAD WRITES A MESSAGE TO HIS FOLLOWERS TO REMAIN CALM; MENTIONS MANY INTERESTING THINGS IN IT. 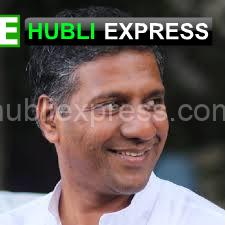 Hubballi: MLA Arvind Bellad has appealed to his followers, friends, and well-wishers who are upset that he did not have an opportunity to serve as a minister in Chief Minister Basavaraj Bommai’s newly formed cabinet not to take to the streets and protest.

The two-time MLA from Hubballi-Dharwad (West) seat advised supporters not to exhibit their emotions and conduct a protest in a long social media message.

He said that his name was brought to Prime Minister Narendra Modi’s notice for the state’s top post as a result of their support and well-wishes. He expressed his disappointment at not being given the opportunity to join the newly constituted cabinet as a minister. “I’m disappointed, too, because I didn’t get a chance, but I’ll tolerate it within the confines of the party. However, these will not be obstacles for me when it comes to doing development work in the constituency “he stated.

He noted the development work he accomplished in his constituency and considered himself fortunate that no allegations of corruption were levelled against his name or the name of his family, and he also pledged to continue to speak out against corruption as he has in the past.

Bellad stated that he is devoted to serving the people of his constituency honestly and that he would do more work throughout his term as an MLA.

He stated that winning or losing is not permanent and that God provides everything when the time comes. “As of today,” he added, “I am dedicated to serving you as an MLA and continuing my good work.”

Bellad stated in the post that he accomplished many works including the establishment of IIT and IIIT with the help of Union Minister Pralhad Joshi, although he did not name former Chief Minister Jagdish Shettar. This piqued the readers’ interest, and they began to suspect that something was wrong between him and Shettar and that he had purposefully overlooked his name.

Readers were also surprised that he addressed corruption in the post and pledged to continue speaking out against it. The readers were curious as to whether Bellad had any information regarding corruption committed by any political representatives in the previous government and whether he would blow the whistle in the coming days.