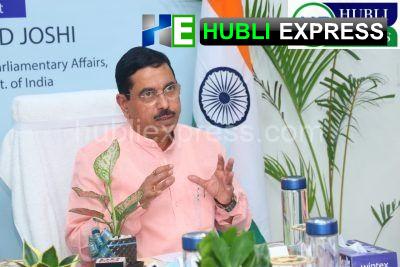 Hubballi: Bollywood star Akshay Kumar may enthral the Dharwad audience during the National Youth Festival on January 13. Union Minister Pralhad Joshi said that he would speak to the actor once again about whether it would be possible for him to come to Dharwad on that day.

Speaking to reporters at his office in Hubballi, Joshi said that Akshay is a very good friend of his. He asked the star to take part in the valedictory function of the Youth Festival on January 16, but the actor said that he would be in London on that day, so I will ask him to visit Dharwad on January 13.

Joshi also said that Prime Minister Narendra Modi will be in Hubballi on January 12 to inaugurate the event: “As of now, Prime Minister Modi will take part in only one program.” “He may attend a few, but those programmes were not finalized, and if they were, it would be announced to the media later,” he said.

Joshi also clarified that except for the inauguration programme, all the events related to the youth festival will be held in Dharwad. MLA Arvind Bellad, CM Nimbannavar, and others were present.