A railway employee stabbed in broad daylight in Hubballi. 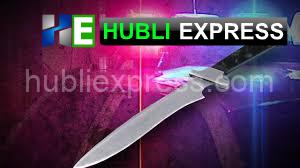 Hubballi: A railway employee was allegedly stabbed by three unknown miscreants near the railway workshop in Hubballi in broad daylight.

The injured has been identified as Chandrashekhar Naidu, 55, of the Ramnagar area in the city. The police said that the incident happened around 1.30 pm near the railway workshop.

Police Commissioner Labhu Ram informed www.hubliexpress.com that the injured was shifted to a private hospital. He said a team has been formed under the leadership of ACP (North). He said the reason for the stabbing is not known yet.

Keshwapur police have registered a case in this regard.