HomeHubballi / DharwadA man receives Covid vaccine after getting an assurance letter from HDMC...

Hubballi: Deputy Commissioner Nitesh Patil had convened a meeting of owners of cinema theaters, marriage halls, party halls, bars, hotels, and restaurants at the HDMC main office auditorium. The agenda of the meeting was that the owners should cooperate in containing the spread of the novel Coronavirus and he sent a message to the owners that they should ensure that their visitors have taken two doses of vaccine to enter the malls, cinema halls, party halls, and other places where the public frequently visits.

After the briefing, the DC started taking questions from the participants. One of the participants, while asking a question, asked the DC who would take the responsibility if something happens to him after taking the Covid vaccine. 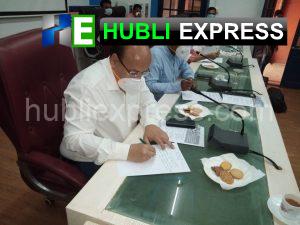 The DC tried to convince him that nothing would happen. And he gave an example, stating he and all others who were part of the meeting had already taken the vaccine and nothing happened to them.

The man who claimed his name was Santosh and he was a fitness trainer asked the DC to give him in writing that nothing would happen to him. Then HDMC Commissioner Suresh Itnal, who was sitting beside the DC, stated that he would take the responsibility and called his PA to give him a white paper, and within no time, taking permission from the DC, the commissioner drafted the content and it was signed by him, DC Nitesh Patil and the Assistant Commissioner.

The letter was handed over to the man by Nitesh Patil, and later he took the vaccine in full view of the media. 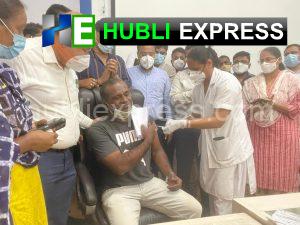