174 killed in a stampede after a football match 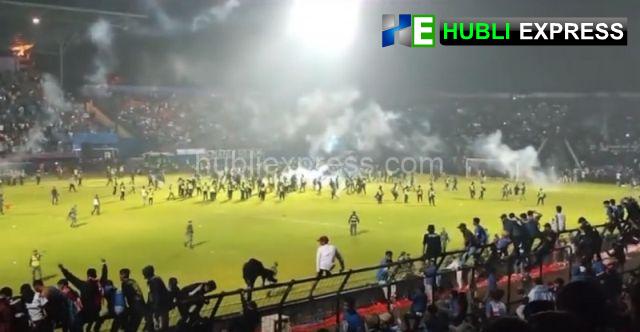 In one of the worst sporting events in the world, 174 people died from panic at an Indonesian football match on Saturday, the majority of whom were trampled to death when police used tear gas to quell rioting, NBC news reported.

After the game, which finished Saturday night with Persebaya of Surabaya defeating the host Arema FC of Malang, East Java, 3-2, riots broke out.

Thousands of Arema fans, often known as “Aremania,” were upset when their team lost, and they reacted by hurling bottles and other items at soccer players and officials. According to eyewitnesses, Arema supporters reportedly swarmed the field at Kanjuruhan Stadium in anger and sought an explanation from the club’s management as to why this match against Persebaya, the team’s archrival for 23 years, ended in defeat.

Outside the stadium, where the unrest had spread, at least five police cars had been overturned and set burning. Tear gas was fired by riot police in response, including toward the stadium’s stands, which alarmed the crowd. FIFA forbids the use of tear gas in soccer stadiums.

As hundreds of people rushed to the exit in an effort to escape the tear gas, some choked to death and others were crushed underfoot. 34 people perished in the stadium as a result of the turmoil, including two officers and children, according to some sources.

More than 300 people were brought to local hospitals for treatment, but many died on the way or during treatment, NBC News reported.